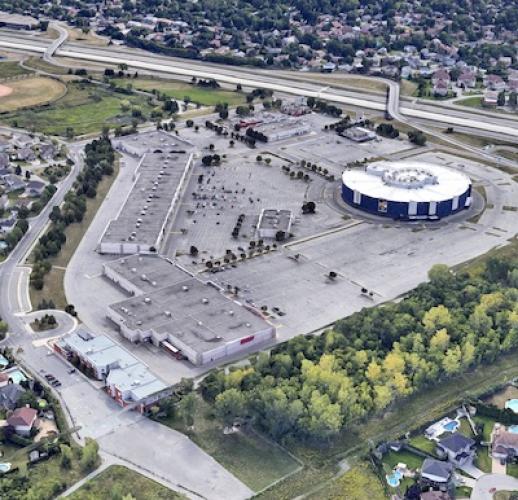 The Centre Kirkland in Greater Montreal will be redeveloped as part of a joint venture between RioCan REIT and Broccolini Real Estate Group. (Google Maps)

RioCan REIT and Broccolini Real Estate Group, which are both rapidly expanding their multifamily portfolios, have created a 50/50 joint venture for a 2.8 million square foot redevelopment of Centre Kirkland in the Montreal-area City of Kirkland.

To be located around the site of the future Kirkland REM light-rail station (expected to open by 2024), the mixed-use project will include residential, office and commercial/retail components, as well as public spaces.

“It was a very good fit between the two organizations, with RioCan (REI-UN-T) bringing the ownership of the asset, and obviously their expertise on the retail side,” Roger Plamondon, Broccolini’s president of real estate development and acquisitions, told RENX. “We bring the construction element, knowledge of the local market and the development market in Quebec, so it became a natural fit.

“We’re hopeful this is going to be the first of many things to come between us and RioCan.”

The redevelopment was one of three which were updated this week by RioCan as part of a series of transactions. The other two involve its Queensway property and a site along Bloor Street, both in Toronto.

Broccolini paid $19 million to buy into the Centre Kirkland property, and will share development costs. RioCan retains a 100 per cent interest in the pre-development leases.

The property adjacent to the TransCanada Highway (Hwy. 40) encompasses about 1.5 million square feet and is currently an open-air retail centre, though there are numerous vacancies. The plan is to redevelop it in as many as six phases, starting with the property closest to the REM station.

Broccolini will be responsible for the design and construction, then will manage the office spaces and market the residential component. RioCan will property manage the retail/residential.

Plamondon expects at least some of the proposed 240,000 square feet of office space, as well as residential, to be part of Phase I.

“Everything is on the table save and except for single-family dwellings. The site, because of its proximity to the REM station, obviously lends itself well to some form of density from a residential point of view. And that residential, be it rental or condo, I think there’s a market for both in Kirkland,” he explained.

Because the site is surrounded by mainly low-density residential areas, Plamondon said community consultations (which had already been started by RioCan), will continue and there will be efforts to minimize the impacts of higher-density housing on existing properties.

Interestingly, it’s not the only major redevelopment in the area. Cadillac Fairview recently announced a massive five-million-square-foot, mixed-use redevelopment of its CF Pointe Claire shopping centre just six kilometres up the highway.

Housing component still to be decided

How many new housing units will be constructed at Centre Kirkland is still to be decided, as well as the mix between condos, rentals and other formats. The property will need to be rezoned to allow for mixed-use redevelopment.

Plamondon said some buildings will be demolished, though it’s not known how many.

“The easy (option) is to demolish everything and rebuild new retail that is going to be much more adaptive to the needs of the project,” he said. However, “we would be very foolish not to try and take advantage of the existing building structures and see if we can incorporate it into the design.

“So we’re tossing around different models right now to see exactly how that fits.”

The office component is, in part, a response to the current pandemic. Plamondon said he has somewhat changed his view on that sector.

“Companies are going to want to locate themselves in an environment that is not in the core, to de-risk if you want, their installations being all in one core area,” he said, noting larger firms are likely to seek a wider variety of options for staff – provided there is easy access into the downtown.

They can also benefit from “a new development where you are going to have greater attention given to green spaces, bicycle pathways, pedestrian paths and retail really geared to a community type of retail.

“I’ve become a little bit more bullish on suburban office, after having shied away a bit.

“I believe there is going to be an inherent long-term movement back to suburban office . . . but very specific suburban office, tied to public transit like the REM. I would not necessarily think the same thing about a suburban office, free standing, with no easy access back to the core.”

The hope is to get consultations done by this summer, and be ready for construction to begin in 2022.

RioCan JVs with Fieldgate in Toronto

RioCan also formed a 50/50 partnership with Fieldgate this week to build a mixed-use condominium project along Bloor Street West, across from the TTC’s Royal York subway station.

The transaction is valued at $180 per square foot of buildable density and resulted in a payment of about $8 million by RioCan to Fieldgate.

The combined property will allow for a significantly larger development, which is expected to receive final approvals by year-end. The project contemplates approximately 240 units with about 18,000 square feet of retail at grade.

Founded in 1957, Fieldgate Homes, the parent of Fieldgate, has delivered more than 20,000 homes across the Greater Toronto Area.

RioCan has also acquired the remaining 50 per cent interest in the development component of its Queensway property (at The Queensway and Islington in Toronto’s West End), which was co-owned 50/50 by RioCan and Talisker Corp. In return, Talisker acquired full ownership of the adjacent 14.6-acre Cineplex component.

The development component is valued at $80 per square foot of zoned density, resulting in a net payment of $9.3 million to Talisker by RioCan.

The 3.2-acre site is occupied by restaurants and a bank, but is to be vacated by July 2022. RioCan has already rezoned this component to permit a 500,000-square-foot mixed-use development including condos and about 40,000 square feet of retail.

Construction is anticipated to commence in 2022. RioCan is in discussions with potential capital partners for this project.

“These projects are prime examples of how RioCan continues to expand its value creation opportunities based on its strong foundation of well-located properties,” said RioCan CEO Edward Sonshine in the announcement.

“We look forward to working with our two new best-in-class partners as we create long-term value and increasingly transform our portfolio of assets into transit-oriented, mixed-used communities in Canada’s growing major markets.”