6 of the Best Office Interiors in Montreal 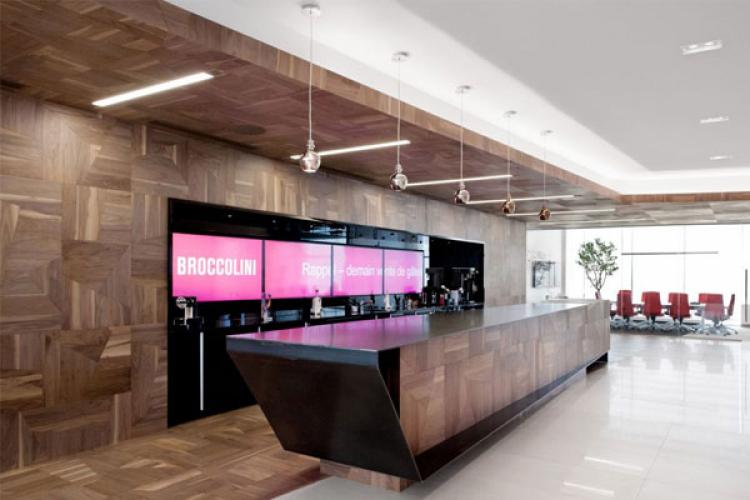 Montreal is not just the second largest municipality in Canada—it's also the world's second largest primarily French-speaking city after Paris. Historically, the city is the commercial capital of Canada, surpassed only in the 1970s by Toronto, and it remains a significant financial, cultural and political centre. Given its financial status, and its predominantly French culture, it's little surprise that Montreal also sets a formidable benchmark for stylish, imaginatively designed offices for the many companies, Canadian and international, which are based there. Here are just 6 of the best office interiors in Montreal.

Jean de Lessard created a distinctive and stylish office in Montreal for the Canadian public relations agency, BICOM Communications. The entire workspace conveys a sense of community and interaction between employees through a design concept that cleverly creates the atmosphere and feel of being in a village.

Huma Design devised the new Montreal headquarters layout for the international online retail business, SSENSE. The workplace is laid out on one entire floor of a former textile factory, imaginatively transforming the area into a contemporary business space that incorporates offices, a studio and warehouse.

Rubin & Rotman Architects designed the Montreal offices of Broccolini Construction with a vintage-inspired interior that is both functional and visually pleasing. The design is simple, and yet subtly conveys the best principles of modernist layout and utilisation of interesting combinations of construction materials.

Designed by LineBox Studio, the new Montreal offices of successful e-commerce software company Shopify make an instant and inspiring impression, thanks to the abundance of natural light as well as the sophisticated use of light woods and subtle colour schemes.

Arney Fender Katsalidis designed the new office space for professional services firm Deloitte in Quebec's most populous city. Sophisticated, spacious and sleek, the design and execution is a perfect reflection of the Deloitte global brand, as well as a standard-bearing showpiece for the skills of the design firm.

Another of the city's best office interiors, technology company PixMob had its Montreal headquarters designed by Jean de Lessard. The bold, distinctive layout and decor makes for a memorable and interesting office space, both for workers and clients.