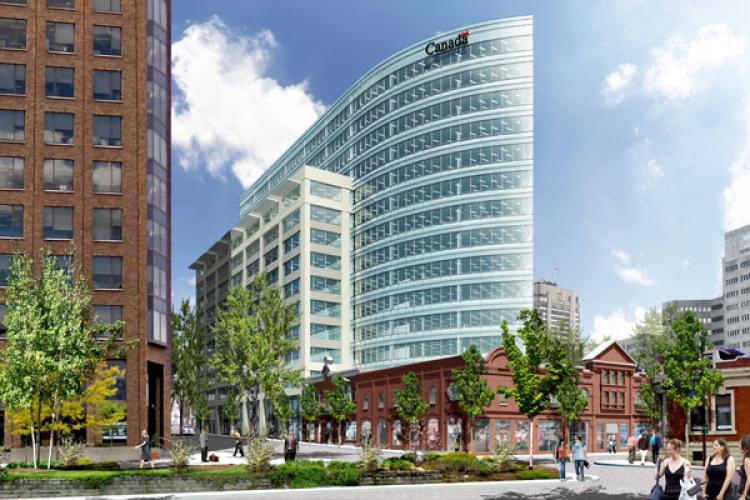 "It's been a long road, something that we've been looking at for the last four years," said Broccolini managing director Anthony Broccolini.

"The hard work and persistence we put into the file ended up paying off."

Broccolini will also build a 12-storey office on a Crown-owned site at 455 Boul. de la Carriere with a gross construction area of 484,000 square feet. Public Works will take 395,000 square feet in the building.

The space not leased by Public Works includes a percentage of common areas in the buildings, such as hallways and bathrooms, as well as a significant amount of ground-level retail space, officials say.

Both properties will be built to a LEED-Gold environmental standard and be leased to Public Works for 25 years. The government will pay an annual rent of $11.7 million at 22 Eddy St. and $8.53 million for 455 Boul. de la Carriere. Added up over 25 years, the contracts total $505.75 million.

The contract is a major win for Montreal-based Broccolini, which is also constructing the 535,000-square-foot Export Development Canada headquarters building at the corner of Slater and O'Connor streets in joint venture with The Canderel Group.

Several months after receiving the contract, Broccolini and Canderel sold the building – which EDC will fully lease through 2031 – to Manulife Financial.

Mr. Broccolini said there are differences between the EDC and Public Works projects, but didn't rule out selling its interest in the Gatineau buildings.

"We have various different options and we are exploring them right now," he said.

The federal government is branding the new Gatineau builds as a job-creating initiative under the economic stimulus program, even though the projects were first announced more than two years ago by then-Public Works Minister Michael Fortier as a way of moving more bureaucrats across the Ottawa River into Quebec.

Three firms offered to construct the other building in downtown Hull: Broccolini at 22 Eddy St., Multivesco at 30 Victoria St. and Westcliff at 207 Promenade du Portage.

However, the federal government cancelled the procurement process in November 2008 after rejecting all the bids on the grounds that none met the Crown's requirements.

In the complaint, Broccolini also said the second procurement process, which it ultimately won, was structured in a manner that was directly biased against the company.

The CITT ultimately decided not to conduct an inquiry into the complaint and Public Works relaunched the procurement process last year.

Mr. Broccolini conceded that going through the procurement process twice required a significant amount of additional time and effort, but said he regarded it as a cost of doing business. He declined to comment on the CITT complaint because it had been dropped.

The federal government said it received two offers for each project in the most recent procurement round, with Broccolini being the low bidder in both cases.

Mr. Broccolini said his company has been "cautiously" growing its local workforce as the agreement with Public Works was finalized and has added about a half-dozen employees in recent months.