Condo project in Toronto's no-name hood will 'deliver the goods' 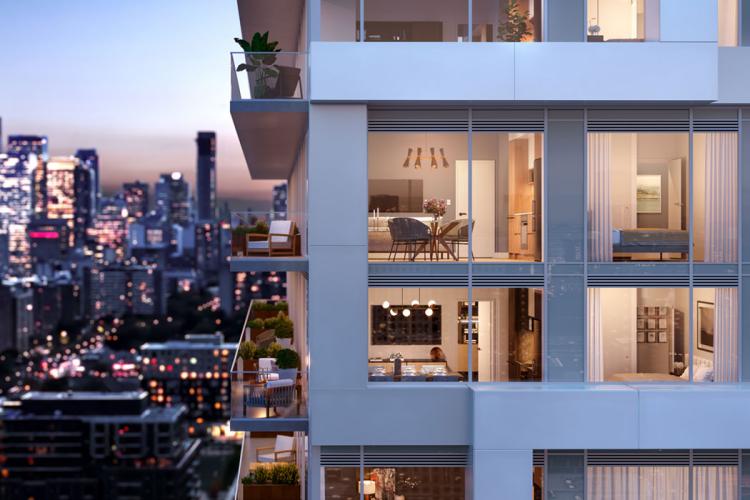 Its immediate surroundings feature a pair of luxury automobile dealerships. What better locale for Montreal-based Broccolini to put its own stamp on a Toronto project?

Toronto is officially home to 140 neighbourhoods, but according to Google Maps the new River & Fifth condo project isn’t part of any of them.

Steps west of the Don River between Dundas and Queen streets, the L-shaped condo tower now in pre-construction at 5 Defries Street is sandwiched between Regent Park, Corktown and Riverside. Its immediate surroundings, however, may be best known for a pair of luxury automobile dealerships, and neither “Benztown” nor “Audiville” have gained much traction as neighbourhood nicknames.

What better locale, then, for Montreal-based Broccolini to put its own stamp on a Toronto condo project? While the mixed-use developer has been part of several commercial projects and residential joint ventures in the GTA — various WeWork offices, the Saks Fifth Avenue store at Sherway Gardens, and 150 and 155 Redpath at Yonge and Eglinton — River & Fifth will bear “our name, and our name only,” says chief operating officer Anthony Broccolini. “This means our family reputation in Toronto is at stake more than ever. We want to make sure residents are happy, and spread the good word to their friends and family. How do we make that happen? By delivering the goods.”

In the case of River & Fifth, delivering the goods is about enhancing residents’ active urban lifestyles. The 37-storey tower, designed by Mississauga’s Graziani + Corazza Architects, includes an 11-storey podium topped by an outdoor swimming pool with shallow-water shelf, as well as an outdoor barbecue area and lounge. Inside, the 24,102 square feet of amenity space, designed by Toronto’s U31 Inc., will include an expansive fitness area with a yoga studio, personal training room and boxing gym, extensive co-working spaces, a hobby room, sports lounge, and a children’s playroom. These spaces, as well as the lobby, will feature marble veining, oak finishes, and wood seating.

“Because we manage all of our construction in-house, we drill down to the details right from the start, ensuring our vision for projects can really come to life. This is so important in the Toronto market,” says Broccolini. “People are educated, know what they’re doing, and appreciate quality when they see it.”

While his company is working to make a name for itself among prospective GTA condo owners, Broccolini is confident the area around River & Fifth will do likewise. “When you think about what’s being planned for the East Harbour and the Portlands, with Sidewalk Toronto coming in, the area is ready to take off.”

Then again, not much needs to happen on the Toronto waterfront for River & Fifth to flourish. As well as hiring NAK Design Strategies to build a new park on the south side of the development, Broccolini plans to install a new pedestrian connection to Bayview Avenue in order to provide direct access to the Don Valley’s walking and cycling trails, which already link up with the nearby parkland of the Leslie Spit, Corktown Commons and Riverdale West.

Urban pursuits are similarly accessible. There are indoor fitness and recreation options at the Cooper Koo Family YMCA and Pam McConnell Aquatic Centre, while nearby Queen Street East seems to add cultural, fashion, design and foodie hotspots by the hour. Chief among these is the Broadview Hotel, a 58-room boutique lavishly renovated and rebranded in 2017. Should residents wish to venture a bit further afield — say, to an office in the city’s Financial District — a Transit Score of 99 (out of 100) shows how well-connected the property is.

River & Fifth’s 580 suites, ranging in size from 1,100-square-foot studios to 1,425-square-foot townhomes, will include elements such as quartz countertops, matte-black faucets, undermount sinks and contemporary porcelain tile backsplashes. Pricing starts in the mid-$400,000s, with tentative occupancy slated for spring of 2023.

“The property really appeals to people from all walks of life,” Broccolini says, adding that more than half of the units have already sold. “That’s what creating community is all about. You want diversity, because it brings a community to life.”

Now the only question is: Will this diversity finally give the surrounding community a name?