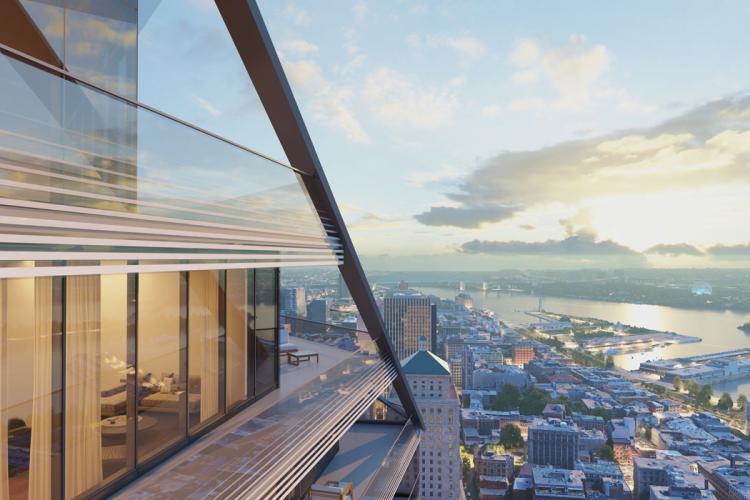 The newest vertical village to adorn Montreal's evolving skyline will be Broccolini Construction's 200-metre tower — one of the city's tallest buildings — with a mixed-use vocation adjacent to a beautiful new downtown green space.

The 56-storey Victoria sur le Parc skyscraper that will break ground next spring will be comprised of 407 units ranging in size from 480-square-foot onebedroom condos to sprawling 4,000-square-foot penthouses, all steps from the Bell Centre, the Tour de la bourse, and with underground access to Montreal's métro system. Thanks to the connectivity to the so-called underground city, "you might not even have to put on a coat, depending where you're going, in our harsh winters," said Jean Langlois, Broccolini's marketing and communications director.

The building will feature four levels of underground parking, but high above ground, Victoria sur le Parc will offer unrivalled views of Montreal's Old Port and the city.

The park in the moniker refers to an acre-sized park that will be built between the skyscraper and the new National Bank head office that Broccolini will build on the other end of the three-acre lot, surrounded by Robert-Bourassa Boulevard, St-Jacques, NotreDame and Gauvin Streets in the heart of Montreal's international district.

The land was purchased earlier this year from Magil Laurentienne and Desjardins; Broccolini then sold two-thirds of it to the National Bank for its new headquarters and a park to be built by the bank and donated to the city.


"The new urban green space will be designed by Claude Cormier + Associés who conceived the iconic Pink Balls installation in Montreal's Gay Village, and who designed amazing parks in Toronto," Langlois said. "He's really the hot-ticket landscape designer right now — not just in Canada but in the world."


The park has not yet been named, Langlois said, but "the park was the city requirement for the whole development. It's not negotiable and it will be gorgeous."


It is expected to feature many exciting elements in terms of walking paths, terraces, restaurants, dog fountains, public art and more.


The ground-floor commercial area is still being examined, Langlois said.

Victoria sur le Parc, a 200-metre condo tower to be built midway between the downtown core and Old Montreal, includes a mixed-use podium with commercial/office space, dubbed 700 St-Jacques, that will encompass nine storeys culminating in a vast 10th-storey terrace.


"We're talking to a lot of people, but there's nothing solid yet."

He said the challenge is to find the right mix — the right model of commercial tenant for residents. "We have to ask if it really does anything for the people who live there." Commercial outlets that include services, maybe some specialty food shops and cafés, are most suitable: "Everything and anything to make quality of life more pleasant, easier for residents."


With many small units starting at $370,000 (for a one-bedroom) and two-bedroom units beginning at $550,000 before tax, Victoria sur le Parc will boast 10,000 square feet of exclusive amenities, not including the shops added to the podium.

Victoria sur le Parc's residential portion, whose address is 788 St-Jacques St., opens onto a vast, well-lit lobby and comprises 407 condominiums ranging from 480-square-foot one-bedroom units to 4,000-square-foot penthouses. Ground-breaking is planned for the spring of 2019, and the project is expected to take three years to build.

Condo tower opens onto an impressive lobby, while podium with commercial/office space is topped by a large terrace

"We're talking about a beautiful, vast, well-lit lobby that opens up onto a beautiful new park," he said, with indoor and outdoor pools, a sauna, and a vast 10th-storey terrace on top of the commercial podium overlooking both the park and Square Victoria.

Despite the building's enormous height, Langlois said two-floor units are not planned.


"We don't do two floors; it doesn't sell," he said. "People want the vastness of space without the hassle of stairs. If you can get all your space — all your square footage — on one floor, there's that much more luminosity for you."


With any Broccolini project, "when you walk in you can feel the quality of the build," Jean Langlois said. "From the foundation to the finishes, you know this property was built by a company that has built tons of properties." Broccolini's imprint will be felt in the new Radio-Canada building and the new National Bank headquarters in Montreal, Amazon's million-square-foot distribution centre in Ottawa, and a new Ikea in Beauharnois.

Victoria sur le Parc amenities include indoor and outdoor pools, a sauna, and a large 10th-storey terrace atop the commercial podium overlooking a park and Square Victoria.


"We've dealt with many projects both as builder, developer and both. We are even our own property managers. Whatever we do, we do it right; it's in our interest to offer excellent service to our tenants and I find it makes a huge difference."


With two hot projects nearby, l'Avenue and 628 Saint-Jacques, Broccolini remains bullish on


Montreal. The city "is on fire right now, not just for the residential market but as a whole," Langlois said. "It's such a good city, specifically for university students — over 170,000 in Montreal. It's the most affordable city in Canada, we have the lowest unemployment rate so it's the next hottest market."

Notwithstanding huge downtown towers "and projects like Griffintown that created that whole boom," building in the middle, between the core and Old Montreal, sets this project apart. The timeline on Victoria sur le Parc depends on sales, but Langlois said plans are to break ground in spring on the three-year build. "We're hoping to sell out by Christmas," he said.

The 56-storey tower comprises 407 condominiums ranging in size from 480 to 4,000 square feet, and residents will be able to enjoy some spectacular views, whether from inside a living room or from a condo balcony