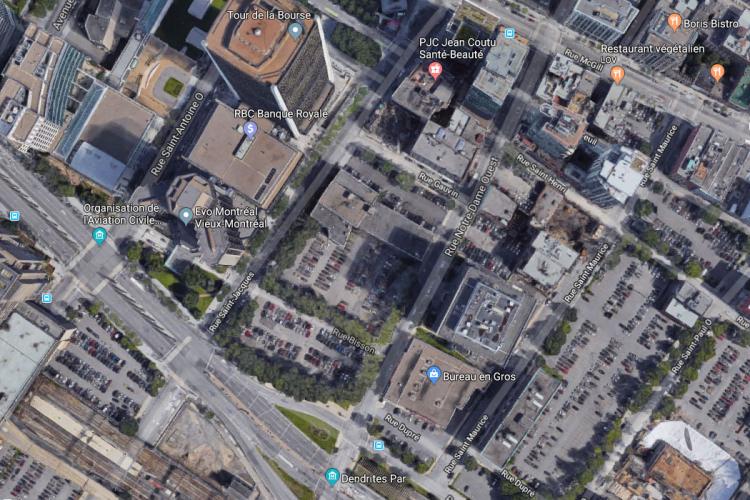 Broccolini's $100-million purchase of an undeveloped property in downtown Montreal proves the developer is "becoming more and more of a force to contend with" in the city, says Roger Plamondon, the company's president of real estate development and acquisitions.

The purchase of the 135,000-square-foot site on Robert-Bourassa (formerly University) Boulevard just south of the Tour de la Bourse (Stock Exchange Tower) was announced early on Friday, Jan. 19. It is being touted as the biggest single land deal ever in the city.

Broccolini says the site is the largest property still available for development in the city's downtown, and the last available site near Square Victoria.

"The numbers are astronomical," Plamondon told RENX in an interview. "From a pure absolute value, the $100 million tickles the imagination, I can tell you that. It also tickled us when we looked at it, too.

While the purchase price appears steep, when compared to transactions for smaller sites and the densities of what can be built on the site, he says it is well within market conditions. The property will be able to return a profit "like any other normal development at this time in Montreal."

Development could be up to 1.5M square feet

Broccolini plans up to 1.5 million square feet of mixed-use development on the site in the Quartier International that would include office space as well as residential and commercial units.

The project will serve as an entry point to downtown Montreal as it will be one of the first major sites motorists see entering the city core via the former Bonaventure Expressway. The route has been transformed into an urban boulevard with new art installations.

"We've been eyeing this site for quite a while," says Plamondon, noting the company entered discussions about four months ago with Magil Laurentienne and the Desjardins Group, who jointly owned the site. He says "a very cooperative" set of negotiations led to the off-market transaction.

"The timing was good to talk to them to see if there was openness and the stars were aligned."

Magil had demolished a building that used to be on the site and had looked at various development proposals, but never went ahead. In 2012, a $350-million project envisaged the construction of 500 condos and office space, but that was dropped a year later.

The site is bordered by Robert-Bourassa Boulevard and Saint-Jacques, Notre-Dame and Gauvin Streets and acts as a junction between downtown and Old Montreal.

It is also near Broccolini's 628 Saint-Jacques, a 35-storey luxury condominium tower. Broccolini plans to break ground on construction of that $150-million project by the end of the month, with completion slated for the summer of 2021.

"It sort of ties in with the continuity of the development program that we have for the downtown core," Plamondon says. "We're confident and very bullish both on Montreal right now, on the condo market in Montreal and on that particular area."

Several possibilities for the new site are being examined, including a possible connection with 628 Saint-Jacques and whether one or multiple buildings will be built, he says.

A version of L'Avenue – Broccolini's development of a mix of condominiums, office and commercial near the Bell Centre in what is Montreal's tallest mixed-use residential tower at 50 storeys – is one of the options being considered, Plamondon says. (see Sales brisk, Broccolini set to build luxury Montreal condos).

"It will obviously be predicated by market demand and discussions with the borough to see how it all fits. It would be foolish and very premature to mark ourselves in one use or another."

Broccolini will be meeting with representatives of the Ville-Marie borough of Montreal – which covers downtown – early next week before firming up plans.

Plamondon says Broccolini has an excellent relationship with the city, having worked with it on the 628 Saint-Jacques, L/Avenue and new CBC building. Broccolini is also the builder and owner of the new CBC Maison de Radio-Canada (see Broccolini begins building new Montreal CBC HQ) media complex, on the corner of René-Lévesque Boulevard and Papineau Street, which is now being built with completion scheduled for 2020.

Plamondon is confident an announcement will be made shortly on the site's vocation. If all goes well, Broccolini would like to break ground on the site or at least go to market before the end of the year.

The deal solidifies Broccolini as a major player in Montreal development, Plamondon says. "We're very, very proud of having been able to structure this deal and put it together."

Montreal-based Broccolini is a family-owned, single-source provider of planning, construction and management services for industrial, commercial, institutional and residential buildings.