Launched in May 2008, Broccolini completed the second phase of its new building in Dorval designed to accommodate five industrial tenants. The entire project covers a surface area of 89,000 sq.ft., including a 29,800-sq.ft. warehouse space (with a 6,200 sq.ft. mezzanine). The building's foundation and steel structure were designed to give tenants the ability to add mezzanines up to 16,000 sq.ft. in the future. The building's envelope is composed of a mixture of masonry, freezer panels, metal siding and curtain wall assemblies, with an EPDM roof. The warehouse has a vertical clearance of 28 ft. in order to maximize storage space.

Some of the building's important features include: an ESFR sprinkler system, ventilation openings for future use, and four drive-in doors, two of which were added during the construction phase. The building's location was planned based on several expansion opportunities on the vacant adjacent lots on the south side of the building and the space available for exterior storage on the west side.

Despite the challenges encountered during the excavation phase, Broccolini's construction project management team was able to implement solutions in order to allow the tenant to open its doors as of October 2008. 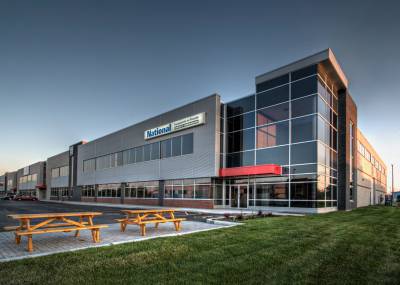